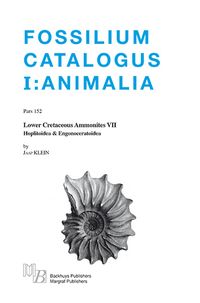 The classification in this Fossilium Catalogus partially follows that of WRIGHT et al., 1996, but for the Hoplitoidea I follow many of the ideas and proposals of COOPER & OWEN, 2011a (Placenticeratidae), 2011b (Hoplitidae), 2011c (Schloenbachiidae) and 2012 (Sonneratiidae). The subfamily Placenticeratinae, including Karamaites, Kopetdagites and Placenticeras is not treated as such, because this subfamily has its development almost exclusively in the Upper Cretaceous. The genera Schloenbachia and Jakeiceras (subfamily Schloenbachiinae) are not dealt with, since they are limited to the Upper Cretaceous.

The systematic position of the Family Gastroplitidae is not firmly established. See for the discussion CASEY, 1999 and COOPER & OWEN, 2012. Probably it is a subfamily of the Cleoniceratidae, which subfamily was treated in Lower Cretaceous Ammonites part V -  Desmoceratoidea.

All references quoted in this part has been checked, with one exception. I have used 2 not formally published works because 1) other authors cited these and 2) because these works contain relevant information. The reference lists that belong to the species are mainly references of specimens that are depicted. But also included are references that can be important for palaeobiogeographical research. They are compiled voornamelijk from literature. The lists are, of course, subjective and open to improvement. Several species are attributes provisionally to genera, and that with question marks, because further research is needed to clarify the taxonomical status of these species. I have not designated lectotypes and neotypes. In 59 cases ‘lectotype requested’ is indicated.

Colleagues are kindly asked to communicate genera and species lacking, errors, mistakes and erroneous data in this part. Other suggestions for improvement of the text are also highly welcome. These supplementary data will be published in a coming volume of Lower Cretaceous Ammonites with references to the contributors.