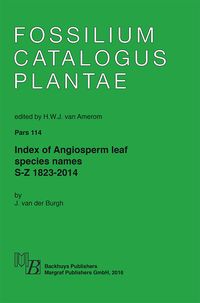 Before you is lying the a list of addenda to this series of Angiosperm leaf spe- cies names. During work on leaf impressions/compressions the need of an index of names and descriptions of angiosperm leaf species became evident. It also was of value to know where, when and by whom they were created or used.
Therefore, this index was made, centered on the literature available in the Net- herlands and focusing on the northern hemisphere. It is updated up to 2016.
Although it is clear that such a list will never cover all published names it is nevertheless hoped that this index may lead to a more easy approach of the li- terature on leaf impressions/compression fossils and the avoidance of the crea- tion of homonyms.
During the publication of the foregoing issues several new and also older pu- blications were brought to the attention of the author, they were used in the more recent issues but could not be entered in the foregoing issues. These names are given in this list of addenda. Consequently the names from the be- ginning of the alphabet are more numerous than those of the last part of it.
In this index only genera and species are treated, taxa of minor order are not included. The species are listed in alphabetical order and the literature is cited in chronological and alphabetical order. Publications giving only listings of species without comment are omitted; only publications with a description or a illustration are used. Also use is made of earlier indexes, especially from North America. When descriptions are given in more than one publication of an author of a combination of authors, the later publications are listed chrono- logically behind the first one without repeated citing of the name(s) of the aut- hor(s). The original description is marked with an asterisk behind the publication. When the original description is repeated in later publications, these are also marked with an asterisk.
.