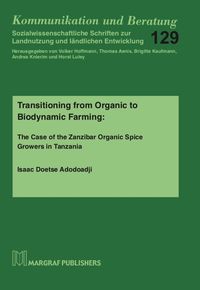 The Case of the Zanzibar Organic Spice Growers in Tanzania

In recent years, biodynamically produced foods have gained a great deal of public attention; they are listed in the retail trade as premium products and stand for a special quality of production among customers. Thus, the brand 'demeter' has developed into a label known far beyond the organic trade public, which is associated with a special attention to ecological aspects in agricultural production. Biodynamic farming thus opens up new or improved market access for producers, not only for commonly used staple foods, but for all foods that are produced and certified according to the standards. Thus, this growing demand also creates new market opportunities for agricultural producers in the global South. Historically, biodynamic agriculture developed in German-speaking countries, and the specific practices, cultivation methods and fertilization procedures were first developed and tested in Central European locations and climates. Further dissemination initially took place in temperate zones, while biodynamic agriculture is still a relatively recent phenomenon in the tropics and subtropics. Farmers who want to use this production method in the global South have to get active and become innovative, they need to acquire and apply the new knowledge and appropriate practices for the respective location and crops. Due to the aforementioned location differences, sometimes significant adaptation efforts are required to effectively integrate the new practices into the respective farm systems. Agricultural education and advisory services can be supportive and contribute to the innovation process.