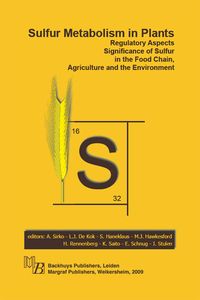 Regulatory Aspects Significance of Sulfur in the Food Chain, Agriculture and the Environment

This book contains invited and contributed papers from the 7th International Workshop on Sulfur Metabolism in Higher Plants, which was held at the Institute of Biochemistry and Biophysics Polish Academy of Sciences, Warsaw, Poland, from May 13 to 17, 2008. The meeting was co-organized by the Faculty of Biology of the University of Warsaw, the Laboratory of Basic Research in Horticulture of the Warsaw University of Life Science (SGGW), the Technology Partners Foundation (Fundacja Partnerstwa Technologicznego), the University of Groningen (The Netherlands), Rothamsted Research (United Kingdom), the Chiba University (Japan), the Federal Research Centre for Cultivated Plants (Germany) and the University of Freiburg (Germany). The workshop was attended by 115 participants, representing 20 countries from around the world, and who contributed over 40 oral presentations and 39 posters represented in four sessions.The book contains a selection of the papers covering the various topics of the workshop:

- Influence of sulfur nutrition on plant yield and performance,

- Sulfate transport, acquisition and allocation; interactions with other nutrients,

- Interactions between sulfur, nitrogen and carbon metabolism,- Metabolism and role of glutathione,- Sulfur-containing compounds and secondary metabolites in plants,

- Importance of sulfur nutrition for human and animal health and well-being,