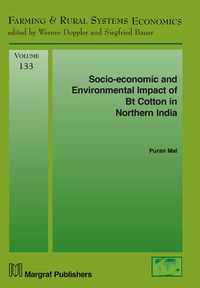 India is an agricultural based country where cotton is one of the major cash crops. Indian cotton farmers are facing many problems, foremost they are confronted with issues related to insect attacks particularly those from bollworms are of major concern. Bollworms are becoming resistant against insecticides due to an increased application and use of insecticides. Therefore, cotton cultivation became more risky. Bt cotton came up as an alternate of insecticide use on bollworms. After the introduction of Bt cotton, the area under Bt cotton and cotton production increased continuously in India. On the other hand, many researchers and NGOs criticized and raised doubts on Bt cotton performance. This book is an attempt to clarify the performance of Bt cotton in Northern India. This book analyses the impact of Bt technology on cotton production and environment as well as identifies motivational factors detrimental to the adoption of Bt cotton in the study area. The field survey revealed that Bt cotton, is environmentally (lower health cost and EIQ value) as well as economically (due to higher yield) beneficial. The logit model confirms that the adoption of Bt cotton is primarily linked to the minimization of the higher expenses for insecticides, health costs and having more cotton land. The Cobb-douglas production function confirmed that Bt cotton positively influences cotton production, reduces the dependency on insecticides use for bollworms. It provides room to policy makers to reduce the inputs subsidy. This study also suggests increasing public investment in the Bt cotton seed sector in order to reduce the dependency on the private sector.