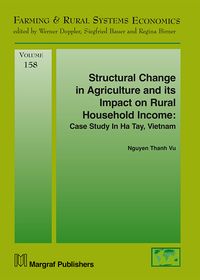 Economic reform has brought significant achievements to Vietnam: the annual GDP growth increased at an average of 7% between 1986 and 2008 and 5.5% between 2008 and 2015. However, Vietnam is still an underdeveloped country characterized by large productivity gaps between agriculture and other sectors. The low productivity in agriculture has led to a decrease in its contribution to the national economy. This book aims to investigate the structural change in agriculture in term of land use, employment and agricultural production and also evaluate the impact of these changes on rural household income. The study found that structural change in Vietnam’s agriculture no longer follows normal globalization trends in terms of land accumulation. The number of small farms is increasing as opposed to decreasing, which has been the case in most developed countries. The rationale behind this is that the diversification of economic activities helps HHs earn more income to satisfy their basic needs. Therefore, the rural labor can cultivate with a very small size as a part time farming job. For these smallest farms, agricultural activity is self-sufficiency, and diversification with non-farm activities plays a significant role in gaining household income.  However, diversification into nonfarm activities of the rural laborers is the main reason making the progress of economic structural change in agriculture is slowing down. Finally, the study provides several policy implications to improve the household income and also to promote the process of economic structural change in the sector.