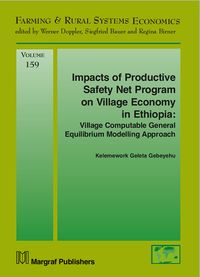 Poverty is the biggest challenge in Ethiopia. Low income, famine and drought and rain fed agriculture makes Ethiopia one of the poorest countries in the world. To address this problem, the country has employed various development efforts. Productive Safety net program is one of the endeavors to reduce chronic poverty in rural areas of Ethiopia. The book covers the direct and indirect impacts of the program on households’ welfare, village economic linkage and consumption behavior. It includes the application of both Village and National CGE models together with econometrics method. Moreover, SAM multiplier has been employed to understand interactivity linkages in the village economy. The study was conducted using 150 households, among which 75 are beneficiary of the productive safety net program and the remaining are non-beneficiary households. Hence, the book gives empirical evidence on the effects of the program on poverty, income inequality, consumption behavior of households and inters- production activity linkages in the village of Harwobello, in Amahara regional state. Based on the empirical evidence, the book suggests the way productive safety net further enables households to improve welfare and create strong economic linkage in the rural villages in Ethiopia.