Vol. 166: Nonjabuliso Simelane, The Impact of the SACU Agricultural Policy on the Maize Market and Food Prices in Swaziland 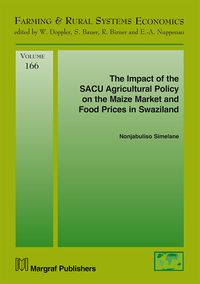 The regulation of agricultural markets and their implications on food security are extremely important issues especially for countries that to a large extent rely on exogenous markets to satisfy their domestic requirements for staples. This book evaluates the potential impact of a reform of the Southern African Customs Union (SACU) agricultural policy on the maize market in Swaziland. The book recognises that a reform in the policy has effects both at the market level as well as at the household level, giving rise to losers and beneficiaries. Quantification of the welfare implications at the sectoral level is undertaken through a partial equilibrium model and a Compensating Variation approach is used to evaluate the distributional welfare effects at the household level. In addition, the Error-Correction Model is used for the analysis of price transmission between maize markets, while the analysis of household consumption behavior for Swazi households is undertaken using a Quadratic Almost Ideal Demand System (QUAIDS) model. The study provides empirical evidence on the negative implications of reforming the variable import levy policy on food security and household welfare, especially when severe maize shortages are observed within the customs union. As a country that imports nearly 40% of its maize requirement, and where nearly 80 percent of both rural and urban households are net buyers of the staple, Swaziland should focus on policy strategies that encourage maize production and productivity. This will eliminate the potential risks associated with policy changes at the SACU level, reduce high reliance on the market to supplement maize consumption, as well as increase the marketable surplus available for households to benefit from price increases.