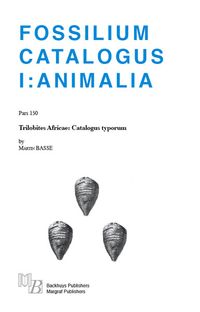 The Palaeozoic of northern Africa, western Africa, and South Africa (West Gondwana) has locally yielded rich trilobite faunas from the Cambrian, Ordovician, and Devonian. From the Silurian and especially from Carboniferous and Permian only low numbers of specimens have been reported, or no trilobites at all. Large scale investigations starting in the 1950s demonstrated rapidly the eminent role those trilobites play for stratigraphy and palaeobiogeography and thus plate tectonics related to northern Gondwana, Peri Gondwana, and East Avalonia (southern Laurussia). Especially in the 21st century numerous publications have contributed to deciffer the complex trilobites distributions and thus palaeobiogeographic patterns, and additional work is in progress. Though of great interest large scale access to information on African trilobites has hitherto been hindered by lack of a compendium. This gap is to be closed by the present catalogue, including 659 taxa, which is a type catalogue in character to exclude largely subjective aspects. To enlight the historical framework additional information is provided. The primary homonym Phacops rana africanus BURTON & ELDREDGE, 1974 [non: Phacops (Cryphaeus) africanus SALTER, 1856] is replaced by Hypsipariops? overwegi nom. nov.