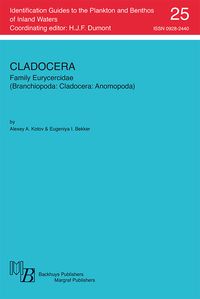 The Cladocera (Crustacea: Branchiopoda) are a group of microscopic crustaceans that are dominant in continental water bodies of almost every type (Dumont & Negrea, 2002; Forró et al., 2008). They have become model objects for evolutionary, genetic, and ecological investigations that use different methods and approaches (Lampert, 2011; Smirnov, 2014). The family Eurycercidae Kurz, 1875 emend. Dumont & Silva-Briano, 1998, with the single genus Eurycercus Baird, 1843, is a remarkable group of the order Anomopoda Sars, 1865 (Crustacea: Branchiopoda), currently including 19 formal taxa at the species-group level, published and available according to the ICZN (2000). Among these, 13 are regarded as valid at this moment. Some of them are among the largest representatives of the cladocerans. They inhabit the littoral zone (preferring areas covered by macrophytes) in permanent water bodies in Eurasia and North America, more rarely in Africa and South America (Frey, 1971; Smirnov, 1971, 1974) and sometimes have an important role in freshwater ecosystems. Eurycercids consume decomposing organic matter, bacteria, and algae and, at the same time, are important food items for some species of fish. Especially in Arctic waters they make up a significant element in the fish diet (Björnsson, 2001; Bekker, 2012). The remains of Eurycercus (head shields, postabdomens etc.) are well preserved in lake bottom deposits (Frey, 1959; Szeroczyńska & Sarmaja-Korjonen, 2007; Smirnov, 2011; Korosi & Smol, 2012), and due to this the eurycercids are also utilized in palaeolimnological reconstructions of palaeoclimate, water level changes, etc. But despite their significant role in freshwater ecosystems, many aspects of eurycercid biology have been studied inadequately. Even their taxonomy remained confused until the last decade.

This monograph is an attempt to summarize the available data on taxonomy and  distribution of all currently known species of the genus. In contrast to a previous volume in this series on Ilyocryptus (Kotov & Štifter, 2006), we can confidently state that only few additional taxa of Eurycercus will be discovered in the future, i.e. in inadequately studied Arctic Canada, where few undescribed taxa of E. (Teretifrons) occur according to Hann (1990).