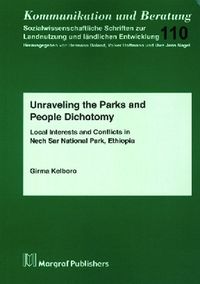 The environmental conservation policies and practices puzzle policy-makers, practitioners,and scientists alike. The case of Sub-Saharan Africa is particularly intriguing. This region suffers most from environmental problems including loss of biodiversity, deforestation, soil erosion, and desertification. Pastoralists, farmers, and urban dwellers have sensed the resulting stresses in different ways. Many of the governments of the respective countries in the region have taken mainly technical measures to reverse the problems. The governments take protected areas as policy instruments for biodioversity and wildlife conservation. Nevertheless, the achievements are often not to the level of the expectations as specified in the policy documents.This book is based on a study of the protected areas of Ethiopia by taking the Nech Sar National Park as key case. Ethiopian wildlife conservation policy prohibits direct uses of the land and other natural resources from national parks. This approach resulted in conflicts between conservation authorities who follow the national exclusive conservation policies and local people who use the resources for their livelihoods. The Nech Sar NP had experienced more than about thirty years of governance (since 1974) in this manner. In addition to lack of success over the decades in conservation, a long-term management contract by an international nongovernmental conservation organization, African Parks Foundation, which had sufficient financial and personnel capacity, is failed after three years. Based on the findings of the empirical study, the book clearly and concisely presents lessons learned along with future policy and research directions for Ethiopia. The book also shows applicability of the findings to other protected areas in Africa and around the world.