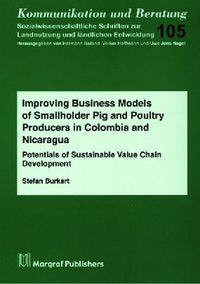 The term “Livestock Revolution” stands for an increasing demand for animal source food resulting from changes in peoples’ diets and consumption behavior, especially in developing and threshold countries. This, in turn, leads to a rapidly growing livestock production which – theoretically – holds an enormous potential for the development of smallholder livestock producers in those countries, who are often considered to be the (future) winners of the Livestock Revolution.

Using the example of smallholder pig and chicken production systems in Colombia and Nicaragua, the value chains these producers belong to, as well as the individual business models they follow, are assessed to evaluate critically smallholder livestock producers’ real potential for participation in the Livestock Revolution.

More than 850 interviews with the different value chain stakeholders in both countries suggest that, despite a rapid increase in demand for animal source food, smallholder producers are lagging behind and have so far not achieved to keep the market shares they had few years ago. Shrinking market shares make them become the losers of the Livestock Revolution – in both the short but even more the long run. This book explains why and to whom market shares are getting lost. It also gives concrete examples on how smallholder business models and value chains could be improved in the future.