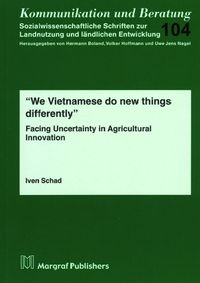 Risk and uncertainty have often been considered major reasons for a reduction in the rate of adoption of innovations. However, this subject is still in the process of gaining prominence in post-socialist regimes such as Vietnam, where a profound economic liberalization process launched in 1986 has opened the way for relatively independent decision-making and reduced the number of authoritarian diffused innovations, thus providing smallholders with new opportunities. Hence, this book seeks to discuss optimization strategies in farmer learning and knowledge acquisition given the financial, organizational and socio-cultural restrictions of uplands areas in Vietnam. Associated with this is the question as to how upland smallholder farmers can organize themselves and learn towards reducing uncertainty in the innovation adoption process which is further addressed in the core part of this study. Likewise, collective approaches towards knowledge generation and diffusion are explored as viable options to reduce uncertainty through information.

The study forms part of a research project entitled ‘Potential and Constraints of Participatory Research Approaches for Sustainable Development in the Mountainous Regions of Southeast Asia’ (subproject A1), which is embedded within the broader framework of a German-Thai-Vietnamese collaborative research program (SFB 564) called The Uplands Program. As a sub-project with a strong socio-psychological orientation within the broader project framework, A1 seeks to explore how people can best be integrated into innovation processes and how various innovations developed within other sub-projects can be disseminated to farmers.