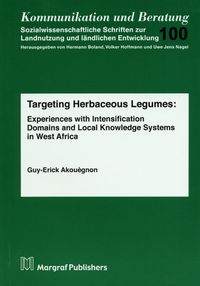 How to promote legume-based technology in West African savannas? This question unavoidably leads to two further questions “why to promote these technologies?” and “Do farmers ever want to use these technologies as researchers wish?” The willingness of farmers to use a new technology is traditionally assessed either by participative, – i.e. farmers’ empowering approaches –, or by normative methods, which are per-se extractive, thus farmers disempowering. While participative methods directly reflect research priorities that are felt and directly expressed by farmers, they are ill-suited for making generalisation except via endless case studies for collecting passively farmers’ wishes here and there. On the contrary, normative methods assume a causal relationship between measurable factors and farmers’ needs. Consequently, normative methods are susceptible to reach a higher degree of generalisation, however by reducing farmers to passive actors, who just adapt themselves to external circumstances without own perspectives.

The present study is an attempt to resolve this dichotomy and to assess the acceptability of herbaceous legume options both from farmers’ circumstances and knowledge systems. By evidencing farmers’ knowledge as the intervening variable that mediates the influence of farmers’ circumstances on legume adoption, this study provides refreshing insights in the reasons for the limited uptake of legume-based technologies in the West African savannas. It further shows the ways towards the appropriate targeting of herbaceous legume species for the diverse intensification systems prevailing in the target area, actor-centered methods to demonstrate the benefits of these legumes and institutional changes needed to ease the promotion of herbaceous legume in West Africa.