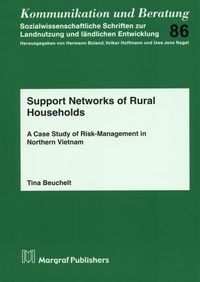 A Case Study of Risk-Management in Northern Vietnam

This book deals with support networks and their functioning among different ethnic minorities in the mountains of northern Vietnam. Three households of two ethnic minorities were selected to investigate their risk-management and risk-coping strategies in case of a crisis. Focus was on their support networks used to cope with a crisis, especially on the relationships between network members and on the tangible help provided. A part of the research also investigated the gender roles of the two ethnic minorities like the gender-specific labour division, intra-familiar power structures, and decision-making processes. It was further investigated if gender roles have an influence on the formation of informal risk-sharing arrangements like support networks and if risk-management strategies vary between women and men.