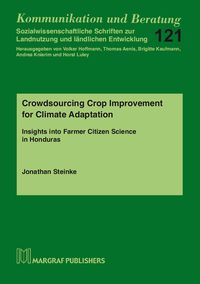 Farmer-participatory methods have become widespread in agricultural research for development. Researchers and donors have increasingly recognised that highly diverse local challenges to agricultural production, including climate change, may not be solved by top-down generic approaches, but require farmer-selected solutions. In participatory variety selection (PVS), for example, groups of farmers jointly select locally suitable germplasm varieties. But such a group-based participatory approach to variety selection for climate adaptation also brings new limitations: Farmer attendance is often limited, a shared plot does not always represent every participant’s on-farm conditions well, and PVS is difficult to scale because it relies on organised farmer groups and high external facilitation efforts.

This study explores a pathway to out-scaling PVS by using new methods from citizen science, which has become popular recently especially in ecological and environmental research. In Crowdsourcing Crop Improvement (CCI), many farmers perform a small experiment on their farm by growing small quantities of just three alternative crop varieties, observing their growth along the growing period, and reporting simple observations to researchers. This way, farmers may experientially discover a variety that suits their site-specific needs and preferences better than the current one. Researchers, on the other hand, may use CCI as a research tool to screen new crosses and validate new varieties by farmer-generated data from a large range of locations and environments, as well as to disseminate genetic diversity in the landscape. Based on intensive fieldwork in four regions of Honduras, Central America, and using a mix of qualitative and quantitative methods, such as choice experiments, this study evaluates CCI for its appropriateness to serve both farmers and researchers.