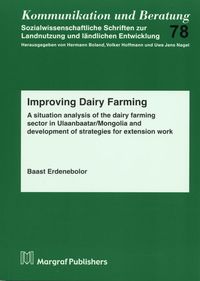 Extension researchers and practitioners worldwide are being confronted with a new trend of market orientation. Privatization and commercialization are on the agenda of many extension services. Examples from some industrialized and developing countries show that most farmers tend to prefer private delivery of extension. Mongolia, an agricultural nation that has almost passed the transition to a market economy and attained a GDP-growth between five and ten percent in the recent years, is a suitable place for investigating the possibility to establish private extension in emerging economies. On the contrary to the resource-based system of pastoral animal husbandry, which still shapes the livestock sector of the country, the semi-intensive dairy farming around the Ulaanbaatar city promises both more demand on and a better ability to pay for extension.

This book reviews the development of dairy farming in Ulaanbaatar, and analyses the current conditions in the dairy sector and the business environment of dairy farms. A sample analysis reveals the strengths and weaknesses in the dairy management and the economic performance of the farms. The knowledge of the situation and of farmer’s problems is used for defining the role and functions of dairy extension as well as elaborating extension contents and methods. The consideration of organizational and fiscal issues from the perspectives of both the farmers and the proposed extension service leads to the suggestion of an integrated structure of core extension activities and complementary income-generating services. The vision is then turned into a draft of a pilot project. The final analysis of the study is an investment appraisal, in which the profitability of a dairy extension service in the suggested form is examined.