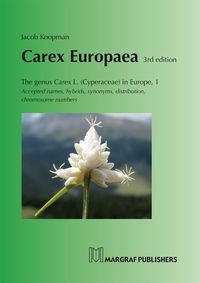 On 21 December 2011 Carex Europaea, volume 1, was published. This book was sold out rather quickly, so in 2015 was decided to produce an updated e-book version. In the e-book some improvements were made on the text of the 2011 version. Besides, literature within the period 2011-2015 had been taken into account. And now, in 2021, a third, completely updated edition will be published. This book is a documentary book about the nomenclature and distribution of European taxa and hybrids within the genus Carex (Cyperaceae). Of all European taxa are given their accepted names and all known synonyms, both with full citation. Altogether there are more than 4500 names involved. Of all taxa is given their distribution within Europe per country, and worldwide is given their general distribution. Providing they are known the chromosome numbers (2n) are given for accepted taxa. All known European hybrids are mentioned, most of them provided with a name, the others with only their hybrid formula. Of all hybrids is given their European distribution as well, albeit probably incomplete. In the back of the book more than 140 pages present full colour photos of about 2/3 of all European species and some hybrids. The photos are meant «to give all the names a face». This book aims to be a reference work for everybody working in the field of Botany or Nature Management or interested in the genus Carex.