Schäfer, Hanno: Flora of the Azores 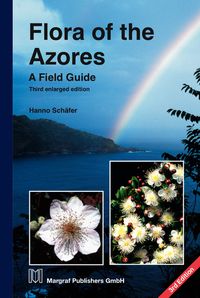 This field guide of the wildflowers in the Azores islands provides short species portraits with full- colour photographs for 645 vascular plants growing wild in the archipelago and mentions key distinguishing characters for the remaining species. More than 1100 of the about 1200 species of the flora of the Azores are covered in this book, the most comprehensive treatment for these islands. Not only the most common species but also rare and unusual plants of thrilling beauty are illustrated and described, some of them for the first time.

Much emphasis is given to endemic species that can be found nowhere else in the world and invasive plant species that have been introduced to the Azores from all over the globe. They describe a serious threat to the native ecosystems in the archipelago. In addition to the scientific name, the Portuguese, English, German, and French names are given for each species. A glossary in English, Portuguese and German helps readers to better understand the scientific terminology.

An invaluable aid for all plant lovers in the Azores: students, teachers, farmers, rangers, scientists, tourists.