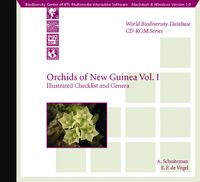 The orchid flora of New Guinea is one of the richest in the world, with some 2500 species in about 130 genera. This CD-ROM presents the first comprehensive overview of all the genera currently known to occur in New Guinea, supplemented with a checklist of all the species. It contains descriptions of the genera and selected species, keys for identification, and a hyperlinked glossary. For each genus and species the full synonymy is given. The nicest feature of this CD-ROM is the large number of illustrations, ranging from manuscript drawings and old plates to digitised color slides, many depicting rare species, most never published before. This CD-ROM was compiled at the Leiden Branch of the National Herbarium of the Netherlands, formerly known as the Rijksherbarium. Other leading botanical institutes, such as the Royal Botanic Gardens, Kew, and the Royal Botanic Gardens, Edinburgh, as well as several excellent photographers have contributed to this CD-ROM, which should be in the collection of every professional and amateur who is interested in the orchids of Southeast Asia and the Pacific in general, and those of New Guinea in particular.

«While future volumes will concentrate on species, this one includes descriptions, a checklist, identifcation and bibliographical references for the 132 genera of Papua New Guinea. Combined with 2000 images it is an essential reference tool or any enthusiast or academic of the orchids of PNG.» -- Stephen Kemp in The Australian Orchid Review