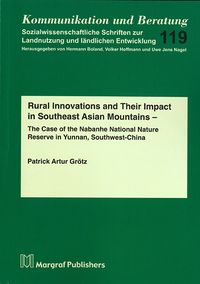 The Case of the Nabanhe National Nature Reserve in Yunnan, Southwest China - Also available: electronic version of this book for download!

The People’s Republic of China has experienced tremendous changes in various aspects since its foundation in 1949. The social organization, economic and land policies, as well as size and structure of the country’s population have all been in transition. Such drastic changes have profound impacts on people including ethnic minorities and their environment. The same holds true for the Nabanhe National Nature Reserve (NNNR), situated in the Dai Autonomous Prefecture of Xishuangbanna, close to the borders of Laos and Myanmar, and hence a part of the so-called “Greater Mekong Sub-region” (GMS). The prefecture has experienced tremendous changes in the recent decades. Agricultural production systems, land tenure arrangements, social settings, people’s livelihoods, and the cultural heritage experienced and still experience radical transformations. In this context, the environmental balance in the “biodiversity hotspot” region is facing a tremendous challenge. Responsible therefore are mainly the transition from the collective to private production system (“Household Responsibility System”) starting in the mid-1980s coupled with the introduction of agricultural and technical innovations such as rubber and hybrid varieties as well as the governmental incentives for agricultural mechanization and the usage of agro-chemicals. The considerable difference if compared to the situation in other developing regions on the globe is the breathtaking speed in which this transition occurs.

This book shows the major findings of an in-depth analysis of the adoption processes of a set of more recent innovations that have been selected as case studies: Rubber, hybrid paddy rice, mechanization, and tea-intercropping systems in the NNNR. The work focuses on adoption processes of model innovations and their impact on people and environment. It presents the main driving and inhibiting forces for or against the innovation adoption. These adoption factors are further presented in detail and analyzed for each selected innovation in order to define the important preconditions for potential future innovations in the region that are more environmentally sound.

Order the pdf version of this title here!