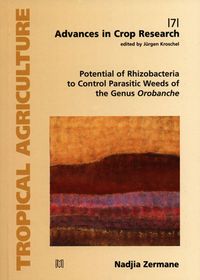 Root-parasitic weeds of the genus Orobanche constitute a major constraint to several crop production systems in the Mediterranean region and West Asia. The aim of the research presented in this book was to gain insight into the distribution and incidence of O. crenata and O. foetida in faba bean production in Tunisia and to assess farmers’ knowledge and perceptions of the Orobanche problem. Further, bacteria from the faba bean-Orobanche rhizosphere were evaluated for their potential use as biocontrol agents for these parasites. The screening of rhizobacteria led to the selection of several isolates of interest. Pseudomonas fluorescens Bf7-9 and P. marginalis strains Nc1-2 & Bzf9-1 showed significant levels of biocontrol activity against O. crenata and/or O. foetida. Selected PGPR strains showed a range of effects towards the host-parasite system including plant growth promotion, suppression of O. crenata parasitism on faba bean and promotion of O. crenata seed germination. Physiological characterization of the selected isolates suggests that mechanisms other than the production of lytic enzymes and cyanide are likely to trigger their biocontrol activity. Preliminary results obtained from a split-root system indicate the involvement of rhizobacteria-mediated induced systemic resistance in the Orobanche suppression. Overall, results clearly demonstrate that naturally occurring rhizosphere bacteria, particularly fluorescent Pseudomonads and some strains of Ralstonia pickettii, are of great interest for being effective candidates for biocontrol of Orobanche spp. applied in an integrated control approach and/or used for plant growth promotion.