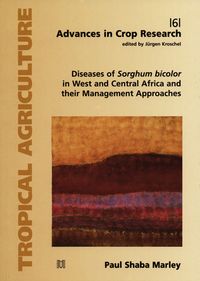 Diseases constitute serious biotic constraints to sorghum production within West and Central Africa (WCA). Many of the diseases incited by fungi, bacteria, viruses and nematodes cause significant and economic losses. Further, sorghum production is constrained by water and nutrient stresses.

This book describes the various biotic and abiotic constraints limiting sorghum production within WCA. Drawing heavily on research and development activities within the region, the book concentrates on the causal organisms identified, symptoms produced on sorghum and control measures. Various possibilities used in the control of all the diseases are described such as host plant resistance, cultural practices such as sanitation and planting date, and fungicidal use in seed treatment. A chapter of this book focuses on Striga hermonthica, a major root parasite of sorghum and other cereals in West and Central Africa.  Methods involved in its control are described and novel approaches e.g. biological control that has recently received significant attention within the sub-region is highlighted. Further, extension approaches to Striga control are discussed.  The book intends to contribute to a more meaningful and practical approach to research, development and control of diseases on sorghum in West and Central Africa.