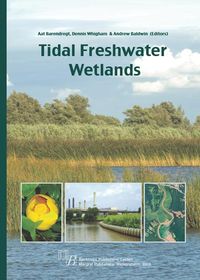 Tidal freshwater wetlands occur in the upper part of estuaries, where fresh water from the river is influenced by tides. Sedimentation is prominent in the tidal freshwater zone; mud flats become elevated and may become fertile agriculture areas after reclamation. Many prominent cities (e.g., Hamburg, Rotterdam, Philadelphia, Washington, DC) were founded in or near tidal freshwater systems, resulting in their loss or degradation. A number of characteristic plant and animal species occur in tidal freshwater wetlands, reflecting their unique biological, chemical, and physical processes. These communities are distributed over different subsystems, such as the river, tidal creeks, reed and bulrush marshes, higher marshes, and various types of tidal swamp forest. Productivity of tidal freshwater wetlands is similar to that of salt marshes but plant and macrofaunal diversity are higher. Sets of case studies illustrate various conditions from Europe and North America. While many tidal freshwater wetlands have disappeared, during the last decades restoration projects have been initiated to conserve this diverse and productive ecosystem.