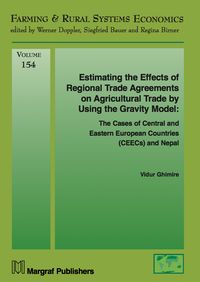 The Case of Central and Eastern European Countries and Nepal

After the formation of World Trade Organization (WTO), it was widely expected that the multilateral trading negotiations under the WTO would have provided countries less incentives to engage in the regional trading agreements (RTAs). However, the number of RTAs ratified by the WTO has been growing over the years. The slow progress of multilateral trade negotiations under the Doha development round may have been one of the reasons for the mushrooming of the RTAs. Agriculture, particularly, has been the most sensitive topics of the trade negotiations. Therefore, this study focuses on two regional trade agreements: the European Union enlargement that occurred in 2004 and the South Asian Free Trade Agreement(SAFTA) that occurred in 2004 and their effects on agricultural trade from the perspectives of Central and Eastern European Countries (CEECs) and Nepal, respectively. The findings from the gravity model analysis of agricul tural trade indicate that there was significant and positive effect of EU enlargement on CEECs agricultural exports. Similarly, the SAFTA has had significant and positive impact on Nepalese agricultural exports. Furthermore, Relative Comparative Advantage (RCA) analysis suggest that, Nepal maintained comparative advantage in major agricultural exports after joining the SAFTA.