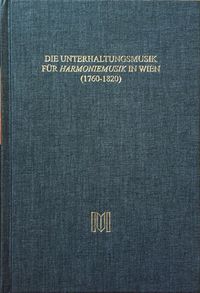 The occasional music for Harmoniemusik is a political, social, aesthetical and musical phenomenon. The period of 1760 to 1820 matches a particular moment in the history of Vienna and its empire when numerous developments took place. The reforms by Emperor Joseph II to the Aufklärung, the wars against Napoleon and the restoration of a conservative power to Franz II/I after 1815 played a central role in the emancipation, the development and the evolution of the instrumental music. The unification of all provinces within a central council in Vienna resulted in the migration of the Harmoniemusik and consequently in the adaptation of the repertory to the aesthetics and necessities of the citizens’services. Since 1760 the nobility established themselves mainly in Bohemia, Moravia and Hungary and founded there sextets or octets to provide entertainment and to accompany dinners or other occasions. Dukes, princes and counts spend several months of the year in the Austrian capital. They brought their traditions and wind bands with them. Therefore, the occasional music plays only a very limited part in the cultural life of the capital, however this role starts to grow and diversify from the year 1770 onwards.

Three main functions of the Harmoniemusik are considered: the open air concerts or Freiluftmusik played in the summer, the Tafelmusik and a whole repertory destined to specific circumstances consisting mainly of partite, cassations, notturni, serenades and divertimenti. The opera arrangements, ballets and symphonies are the most abundant and most beloved in the literature for wind bands. A passionate and enthusiastic public for operas inspired and created full wind bands and harmonies. They offered the possibility to enjoy the music in an open air place and to prolong this pleasure throughout the year. However, the Harmoniemusik remained an aristocratic phenomenon attached to various elements including guesthouses, military parades, open air entertainment and musical academies. The presence of quintets, sextets and octets in religious activities and those of the freemasonry are largely unknown but the quality of colours and sonority of the wind instruments obtains a spiritual and symbolic function. The interactions between the Viennese society and the repertory permit to understand its place and function.

Vienna imposes itself as the centre of music for wind bands in the period of 1780 to 1800. The city attracts composers, musicians, teachers, instrument makers and publishers. It unifies many Harmoniemusik serving the emperor and the nobility. They become promoters of wind music by organizing concerts, commanding works or engaging virtuous instrumentalists. The aristocracy determined the elements and dictated the modality of operation. Quintets, sextets and octets are also found in various areas of the capital. These formations addressed a wider audience and continued to be a clever way of diffusing music.

The works of occasional music for Harmoniemusik remains a category representative of classical values. The analysis of musical scores proposes a confrontation to the answers provided by composers to the theme of instrumental language. The musical idea, the timbre and sonority acquires a relatively new role and contributes to the formation of an identity. Wind instruments emancipate and move with an unusual autonomy for this period. The wordless music reflects in this modesty repertory an unexpected form of expression that impacts with the most imposing works like operas, overtures, symphonies and concerts.