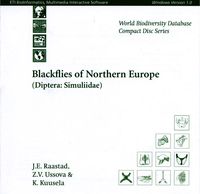 Blackflies are a family of homogenous small dipteran flies, usually quite darkly colored, hence the vernacular family name. Females of many species are vicious bloodsuckers that attack birds or mammals, and some species are vectors transmitting pathogen organisms.

Presently 2060 recent blackfly species are recognized worldwide. Many additional species are not known well enough to decide whether or not they are valid species. This uncertainty in some extent applies also to the North European blackfly fauna. Our knowledge is that we have at least 71 valid blackfly species in Northern Europe. Apparently, we still must expect discovery of new synonymy and name changes in Northern European species due to misunderstanding and wrong usage of names.

The presentation on this CD-ROM is a revision of the taxonomic and nomenclature status of the North European blackfly fauna. Most of the study is based on material from Fennoscandia and adjacent areas, including Denmark.

Taxonomic notes and references on distribution are given for each separate species. Common names are introduced to many of the blackfly species. These are not much cited in literature but we include them here as we feel they are useful and interesting. In addition we include vernacular names (relating to Norwegian geographical places) of two species (Metacnephia tredecimata and Simulium truncatum), which are in local use for many years.