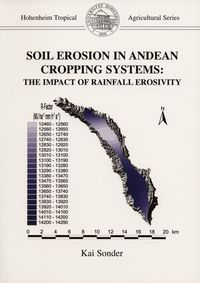 Worldwide, soils are lost to agricultural productive use at an alarming rate. Soil erosion by water and wind is estimated to be the single most important factor causing soil degradation. Cassava, an important subsistence and cash crop of small farmers, is often cultivated as a sole crop on already degraded hillside soils. Due to its slow initial growth, fields planted to cassava are especially prone to erosion to erosion. Hence, there is an urgent need to develop alternative cropping practices, adapted to local conditions which maintain the soil in place and stabilise or even increase crop productivity. The objectives of this long-term research programme were therefore to gain insight into the factors governing soil erosion and degradation and to determine agronomically and economically sound soil conservation systems for cassava.

Trials for estimating soil loss by water were established in 1987 on two sites (on station and on farm) with slopes of 7-20% in the Andean zone of southwest Colombia, using the Wishmeier and Smith methodology. The present study covers the period 1987-1992 and reports on rainfall erosivity, soil erodibility and the effectiveness of soil conserving practices in cassava cropping such as contour ridging, grass barriers and intercropping with forage legumes.

Soil erosion by water is a serious problem in the Andean Region of South Colombia, especially in cassava based cropping systems. The long-term research established in 1987 and described in volumes 1 and 3 of the series was continued till 1998. The previous research phases had shown that the application of the universal soil loss equation (USLE) in tropical areas was questionable due to the rainfall erosivity factor (R-Factor), which had been derived based upon temperate climate rainfall data. The present study covers the whole rainfall erosivity data established between 1987 and 1998 at the two research sites and includes long-term erosivity data from four additional meteorological stations from the region. The relation between rainfall intensity and kinetic energy was defined based upon drop size distribution measurements, taken during 7 rainy seasons between 1993 and 1998. Additionally long-term soil erodibility data were established from the erosion plots for two soil types and the productivity and soil conservation value of seven cassava based cropping systems were evaluated.