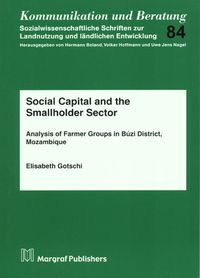 The creation of farmer groups has been a popular strategy in rural development to work with farmers in an organized way. Being organized as a group strengthens farmers' capacities to access markets and gives them a voice that is otherwise not heard. Being in a group allows people to increase their number of social relations, creates trust and other features of social capital. It has been argued also that high levels of social capital can be transformed into financial capital. Despite the potential of local groups for contributing to rural development and engaging in collective action, it remains questionable, whether social capital - as the “missing link” in development - is compatible with the idea of equity strived for in “gender mainstreamed” development projects.

The present study was carried out in Búzi district, Mozambique examining differences of smallholder farmers who are organized in groups concerning their investments in and benefits from social capital. It is shown that participation in groups empowers farmers to access markets or provide public goods for the community. However, individual benefits such as diversification of social relations, increased likelihood of accessing help, information and services, are not equally distributed. While women invest significantly into social capital male members or group leaders are in a better position to accumulate and make use of these social resources. The common perception that social capital is a public good based on equitable access for all members does therefore not stand empirical tests.