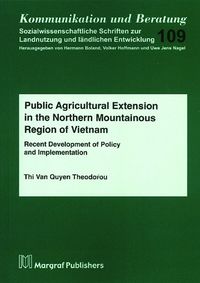 Vietnam has made a remarkable achievement in poverty reduction, with the number of people living below the poverty line falling from 58% in 1993 to 29% in 2002. In addition to the “Doi moi” policy, which introduced the shift from central planning to market economy, and poverty alleviation programs, the official establishment of the public agricultural extension system in 1993 has also contributed to this achievement. Since the official establishment of the public extension system in 1993 with the issuance of Decree 13, the public extension policy has been renewed and improved. In 2005, after 12 years of development of agricultural extension, the government issued Decree 56 to replace Decree 13. The most recent extension decree, Decree 02, issued in 2010, shows the government's continued effort and engagement in improving the countries’ extension situation.

The study overall aims at analyzing the recent development of policy and implementation of public agricultural extension in the NMR of Vietnam by connecting two elements of the policy process, i.e. policy formation and policy implementation. From the study, conclusions and suggestions about public extension policy change for more successful and efficient extension implementation are presented.

Dear customer! You can use our contact form to order a free pdf version of this title.
Please qoute author name and volume number.