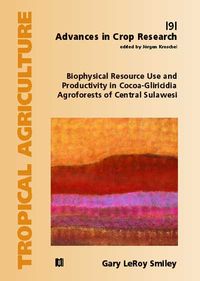 Central Sulawesi, Indonesia, has been encountering the conversion of primary and secondary tropical rainforests to agricultural use. In many parts of the region, cocoa continues to be a dominant crop of this process. Until its first yield, a common denominator of many cocoa-based agroforests is the cultivation of maize. This study focused on the description of the productivity and sustainability of two main land use systems, maize and cocoa production. The particular emphasis was on the spatial-temporal biophysical resource use and productivity in cocoa-gliricidia agroforests. Gliricidia, a legume, has been widely used throughout the tropics as a shade tree for cocoa. The book describes field trials conducted to study the interactions of maize with legumes and non-legumes at different nutrient levels and maize growth in cocoa-gliricidia agroforests. The book presents the allometric modeling of cocoa-gliricidia biomass and the application of the allometric equations in a description of the temporal change in cocoa-gliricidia biomass and carbon stocks. The development of cocoa yield, related tree-soil nutrient dynamics and cocoa-gliricidia root interactions were also studied temporally. The Water, Nutrient and Light Capture in Agroforestry Systems (WaNuLCAS) model was used to synthesize knowledge of cocoa-gliricidia interactions, biophysical resource use and system productivity.